For some time now I wanted to make myself some kind of MIDI footcontroller, something like Behringer FCB-1010. FCB-1010 is really great and sturdy, and I had it for some time, but it is a bit too large and too heavy for bringing to a rehearsal every now and then. I also wanted to have a few knobs too. But what I wanted the most is the ability to change bindings on it while running and possibility to have multiple MIDI events binded to one control. I know there are great apps out there, like mididings or qmidiroute for doing that, but I wanted to try to make it myself. Also, since I need to convert serial-usb data to MIDI, why not do everything at once.

Complete idea was to make a device that can be connected by USB and configured by software but also that it can be connected to MIDI equipment using standard MIDI cable and configurable (at least to some level) directly on device. Pretty much only reason for putting LCD display on device was onboard configurability. And also because I already had a LCD display with serial driver laying around :). I currently implemented only the first part (USB connection and editing on computer). 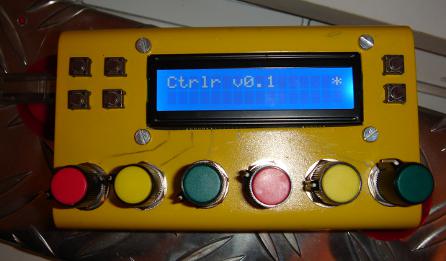